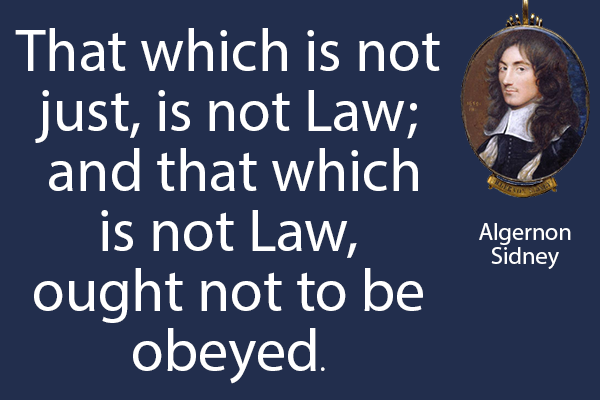 In 1683, Algernon Sidney, member of Parliament, son of an earl, and member of the Green Ribbon Club along with John Locke, was arrested on suspicion of treason (and the Rye House Plot to assassinate Charles II).

The king's men searched his house and found an unwritten manuscript, which he maintained in his trial was not intended for publication.

The judge in his trial was one of the most infamous judges in all of English history, George Jeffreys.

Sidney was a friend of William Penn, and worked with him on establishing the founding charter of Pennsylvania. He was well aware of Penn's trial in 1670 and the heroic efforts of Edward Bushell and the other juror's that acquitted Penn, and he was aware of the decision in Edward Bushell's case that juries could not be punished for their verdicts.

But Jeffreys would have none of Justice Vaughan's decision in the Bushell case. He told the juries that he was the judge of the law, and that they were judges only of the facts.

Sidney was convicted of treason because of his writings and beheaded. Five years later, the Glorious Revolution of 1688, of which Sidney and his fellow Whigs were a part succeeded.

Ten years later, the manuscript for which he was executed was published as Discourses Concerning Government. The book had a great impact on the founding generation of the U.S. Sidney was mentioned with Locke many times. Caroline Robbins called the Discourses a "textbook for revolution" in America.

The heart of Sidney's Discourses Concerning Government was about natural rights theory upon which the framer's views and jury nullification is based.

This quote from Discourses was used by William Lloyd Garrett in his long fight against slavery in America.

The quote deserves to be one of honor in the pantheon of quotes about jury nullification by the framers and those who influenced them.

You can join us using

Created with NationBuilder – Theme by Tectonica